I am honored to have received the Visa D’or Daily News Award 2013 at Visa Pour L’Image festival of Photojournalism. The Finnish Helsingin Sanomat newspaper was shortlisted with 35 other newspapers from all over the world competing for this award. It was also the first time for HS to enter this competition, so I am honored it was with my photos.

During 2012 and 2013 Helsingin Sanomat newspaper published four of my photoessays on the Syrian civil war. They did it large and loud and committed to my coverage. This despite of the hard economical times for the media.

I also want to thank the jury and Visa Pour  L’Image for waiving the flag high for photojournalism. 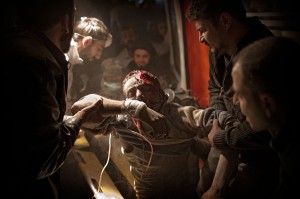