The security in Benghazi is getting worse. Frustration is high due to the ongoing war and acts of violence are frequently reported. Several journalists has been targeted during the last months.

Last Thursday photojournalist Tracey Shelton checked in at Hotel Africa in Benghazi after a two month long assignment in Misratah.

During the first night two men, dressed in army uniforms, bursted her hotel room with guns and knives. Tracey was tied up, gagged and beaten badly with the guns. Her head was repeatedly hit against the floor during the struggle. Despite screaming nobody came to help. Neither did the hotel workers react on the ongoing fight. All her gear was stolen and the intent was to take her too. Luckily a knot got loose and she was able to untie herself, fight herself out and escape thru a window from fourth floor to a nearby balcony and from there to a safe zone at friends hotel.

The National Transitional  Council in Benghazi is concerned about the incident and takes action in finding the ones responsible. The motives for the incident in the hotel still remains unclear. NTC has also said it’s not the first incident. It also shows that there has been other female journalists harassed in Hotel Africa.

Tracey was badly beaten and ended up in hospital. Her state is now stable and she is recovering. 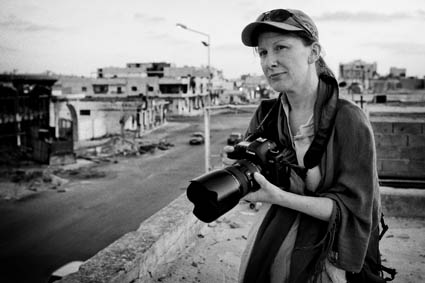 Tracey Shelton covering the conflict in Misratah in June 2011